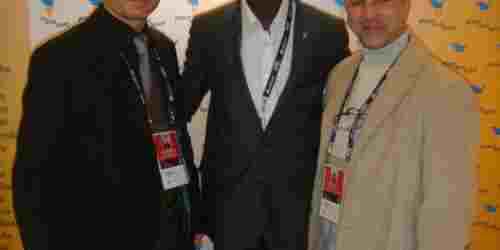 Amatto Zaharia and Eric La Rocca , the official IKF delegates to SportAccord Convention held in London 2011 , had a great and succesful meeting with one of the greatest athletes in the world , Wilson Kipketer .

Wilson Kipketer (born 12 December 1972) is a Kenyan born Danish former middle distance runner. He holds the current indoor world records at the 1000 and 800 metres distance. While dominating the 800 m distance for a decade, remaining undefeated for a three-year period and running 8 of the 17 currently all-time fastest times .

„The sport matter because it’s a great way of challenging and learning about yourself . But also , getting involved in sports is an amazing way of uniting people , and this more than ever is so important . This is why all sports are equal in my opinion , so NO SPORTS IS BETTER THAN ANOTHER , important is to work united togheter for the same goals .” , declared Wilson Kipketer for SportAccord Daily News .