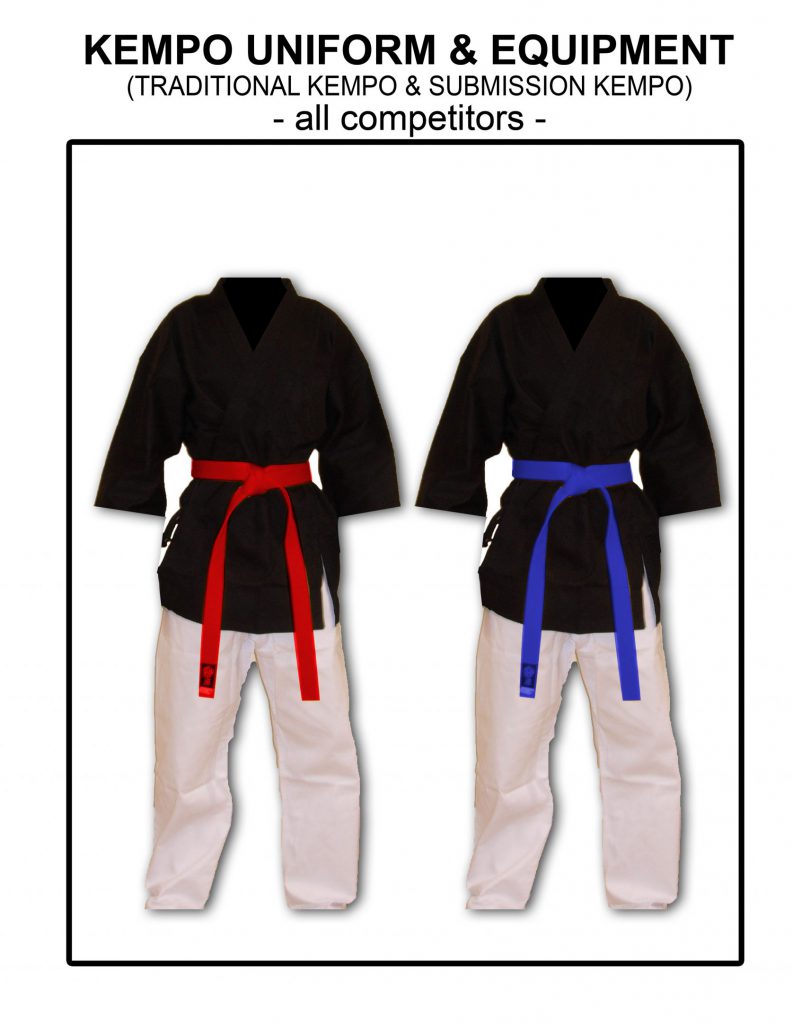 Choreography principles: in Self-Defense Kombat there must be 70% real techniques of fighting and 30% choreographic show.

2.      SELF-DEFENSE SPORT is a team of 4 competitors (3 attackers and 1 defender).
Choreography principles: in Self-Defense Sport, there must be 30% realistic fighting techniques and 70% choreographic and acrobatic show.

The weapons used for the SELF-DEFENSE performances have to look like real weapons but must be not sharpened; fire guns are not allowed.

– weapons have to be covered with a safety cover when outside of the competition area.

– when the specified category will be called, all competitors from that category will take place on the chairs in the back of the competition area; they will not leave their chairs until the announcement of the head referee.

HOW TO WIN IN SELF-DEFENSE
– the decision will be taken by the majority of referees.
– the competition in Self-Defense there will be always one team compete against another team.
– the winning team will go in the next round, the losing team is out of the competition.
– the last 4 teams will compete for place 1 to 4 in that competition.

REFEREEING IN SELF-DEFENSE
– the refereeing system within the International Kempo Federation is by having 3-5 referees.
– the referee team is separated into 1 head referee and 2 or 4 side referees.
– in the semi-finals, there are at least 3 referees from different countries.
– in the finals, there are 3 or 5 referees depending on the organizer staff of the IKF.
– the decision will be taken directly by the referees as follows: the side judges and the head referee will watch in the same direction and they will show the winner of them directly by their bleu or red stick at once, at the sign of the head referee.
– the decision will be taken by the majority of referees.

HOW TO CREATE AND PERFORM A SELF-DEFENSE DEMO
– the coach and competitors must know the time will start to be counted from the salute for starting the performance until the salute for ending the performance.
– each team must perform strictly 4 scenarios looking like 4 short street-fights scenarios.
– each “scenario” will be performed only in the real-speed.
– in the first 2 scenarios, the attacker will attack strictly by using no weapons and in the last 2 scenarios, he will attack with weapons.
-for the entire performance the defender will be the same.

– in each team, the defender will use always just empty-hands for his defense but he can also finish as his wish using the weapon took it from the attacker. The defender starts always without weapons.
– each team will perform their scenarios using Self-Defense techniques in a realistic but also in a show/choreographic manner.

JUDGING SYSTEM IN SELF-DEFENSE
Scoring points are given for the following principles:
Presentation:  The way of entering the Competition area, the martial attitude,  the introduction, the salute, and the way they are closing the performance.
The performance: How was their performance at the normal speed? It was good, it was too slow…? It was focused on their techniques?
Working together: How are the competitors working together as a team? Is this a minus, a normal, or an extra good in performance? Are they working as a real team, synchronizing their techniques?
Choreography: How was the choreography? It was realistic? It was realistic enough? It was also attractive and spectacular having inside high standard and level of techniques?

DISQUALIFICATION IN SELF-DEFENSE
– if one team is not coming after de head referees call them by the microphone to compete after 1 minute from the last call, is followed by disqualification.
– when a team stops the performance without ending their choreography, disqualification will follow.
– when a member of a team moves out of the competition protection area, the team will be disqualified.