SEMI-KEMPO rules must be organized mandatory in all world and continental championships. 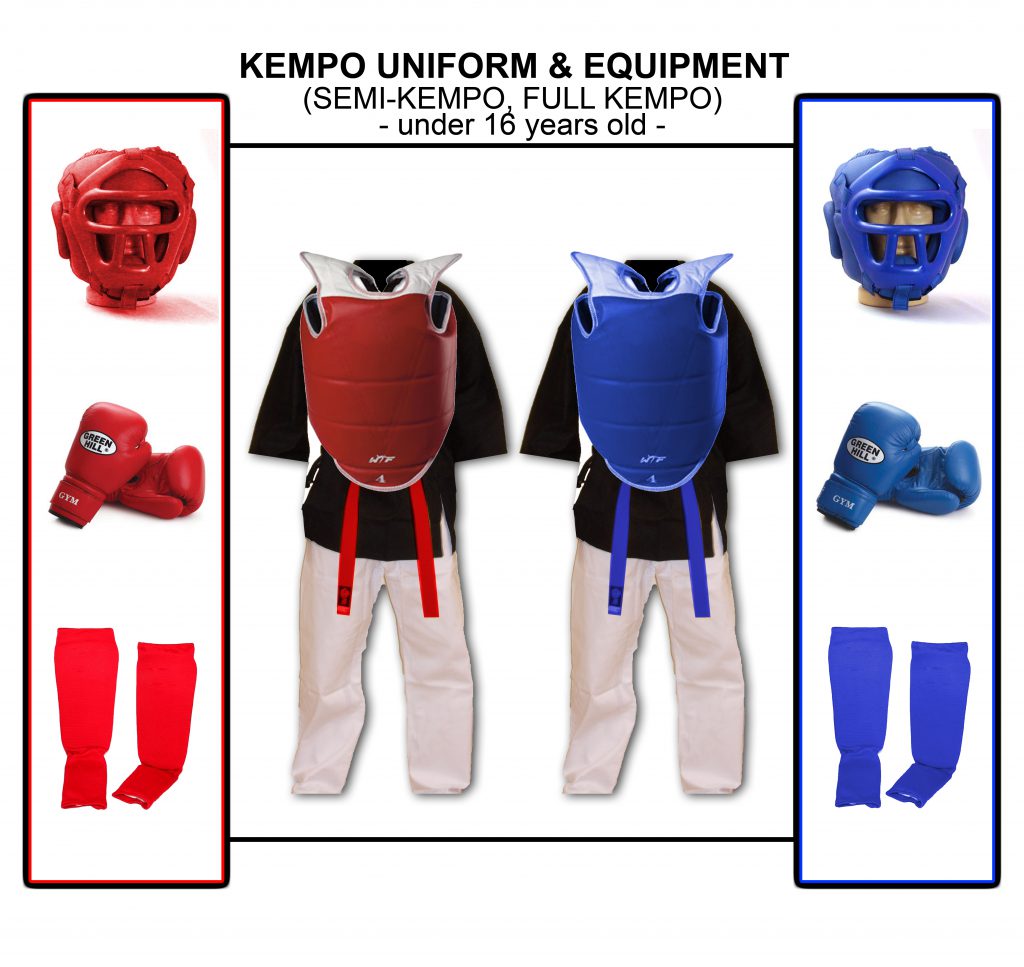 Other specifications :
-all the strikes (kicks and punches) must be used having good control, “touch pointed”, having a turn-return trajectory.
-in case of more than 1 (one) correct strike in the same action, only the first good one can be scored.
-any techniques which are not specified in the „Techniques Permitted ” are illegal.
-max. 3 strikes in the same action are allowed (example of using strikes: punch-kick-kick or punch-kick-punch, punch-punch-kick, etc) 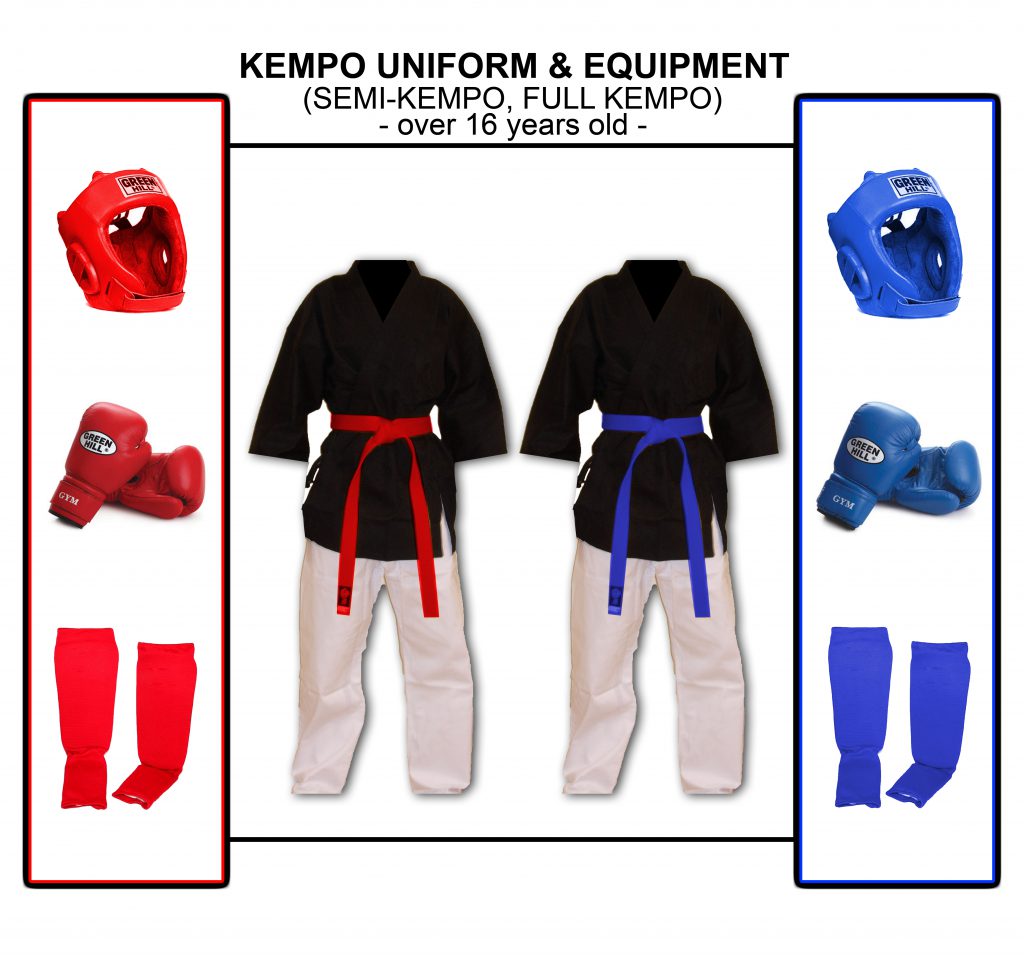 HOW TO WIN
-by decision
-by abandon 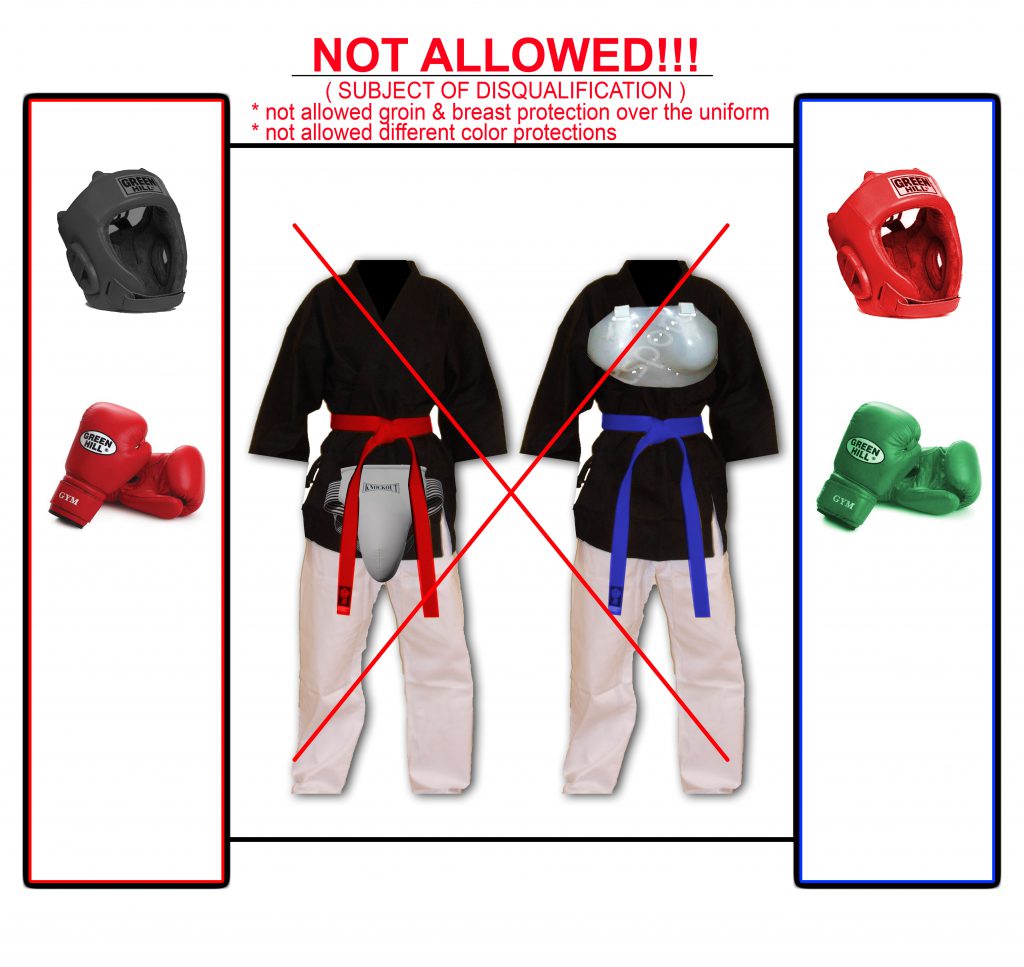 -anytime during the fight when there is 5 points difference between competitors.

– White Gi pants next to the ankle, Black Gi jacket, Red/Blue belts depending by the corner.
– Boxing gloves 8-10 oz., Red/Blue depending on the corner.
– groin protection for men and chest protection for women, just under clothes.
– any model of shinguard (NO plastic insertion inside), not necessary to cover the entire foot.
– mouthguard (gum-shield).
– headgear with a plastic mask under 16 y.o.,  in the color of the respective corner.
*  in case of using headgear with a plastic mask the mouth-guard is optional

REFEREEING and JUDGEMENT
-there will be 1 Central Referee (central referee with judge’s rights) and 2 Judges (on aside to the fighting area).
-the referee will break the fight after every action and shout POINTS  whenever he considers somebody must be pointed without stopping the fighting-time. The Central Referee will ask the side judges for their opinion. The judges will show their score (red or blue) at the same time as the Central Referee only after this one shout POINTS.
-also, the judges can ask for the attention of the referee by knocking with the 2 colored sticks red and blue. After this signal, the referee can stop the fight and shout POINTS to see the score and also will show his opinion in this case (red or blue). If the Central Referee considers that there was no scored action involved he will let the action continue making a sign with his hands as NO SCORE.
-if there will be a majority decision ( ex: 2 from 3 judges) the referee will score points and he will show this decision to the main table in order to be noted there. The Central Referee can consult the judges about a score decision and ask for the decision again.
-after the decision, the referee will shout to the table judge (score judge) the number of points earned and the color of the competitor scored (ex.: Red, 2 points !) and will show with one hand (competitor colored) the competitor scored and with the same hand the number of points given, overhead. The referee has to ensure that the score-judge scored the points on the score table.
-in case of a KO will appear by voluntary action, the fighter who is not injured will be disqualified. In case of a KO will appear to a competitor who made a wrong move by a wrong reflex, this competitor will lose the fight.
-penalties and warnings will be given by the central referee without consulting the side judges. He will show with one hand (competitor colored) to the competitor who earned the penalty and he will shout “warning”. The referee has to ensure that the score-judge scored the penalties to the score-table.
-the score for warnings for fouls (KD or excessive force used, stepping out other fouls) will be kept on a separate counter on the score table for each competitor.
-the central referee, in case of light fouls, will just administrate (verbal warning) the athletes, but in case of serious fouls, he will give the official warning (counted separately on the score table). The central referee can decide to disqualify the athletes without waiting for the warning or -1, -3 points penalty system in very serious fouls, with the approval of the chairman of the referees.